When We Need To Do More About Bullying

March 13, 2018
Bullying is something that happens when you have someone that is being hurtful to you. They don't just have to be physically hurting you because bullying comes in so many different forms like hitting, pushing, spreading rumours, racism, threatening or undermining someone. Bullying can happen anywhere and by anyone who wants to be a bully. Sometimes they don't realise that they are bullying and they are horrified when they realise, so sometimes bullying can be easily resolved if you talk to each other. Bullying can happen to all sorts of people from kids to grown ups and nobody should feel ashamed because it's not their own fault. 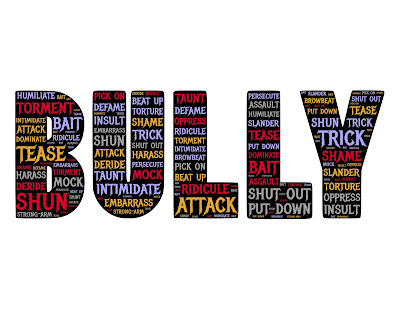 My daughter Beth was bullied when she attended Dover Girls Grammar School when she attended it 8 years ago and the problems with schools are that they don't like to admit that there is a problem going on there. The bullying with my daughter spilt out on to social media and a group of so-called friends starting to write some really hurtful things to her. The school didn't want to do anything to help her because now it was happening out of school. But surely schools should be looking out for their students all of the time, after all, if a teacher saw a child be abducted in the street outside of school hours they wouldn't walk away would they? So why would they walk away from bullying?

Bullying is a real problem! It doesn't just happen in between certain hours, it is happening in our schools and it is happening in our social circles. With the rise of kids using social media, bullying can happen anytime and often without the parents knowing. How many of us have set our kids up on social media underage? I am guilty of doing it for Tilly, She has an Instagram account that I strictly control. But it was her choice to ask for an account and she asks me to put certain pictures on there for her. But she won't be allowed to have the account until she is older, and until I am happy that she understands how to use social media safely. Is your child secretive on social media? Maybe they are being bullied online!

Kids are often ashamed of being bullied and they won't tell you as a parent. Of course, they are told to let an adult know that they are being bullied but often they are too scared to say anything. Or if they do say anything about being bullied, they are often not listened to. There is a difference between listening to a child and actually hearing what they are saying. As parents we need to listen if our child is the bully, we need to stop saying that our little cherub would never do that. Our kids are just as likely to bully as being the victim of a bully.

Every time a school denies there is a problem with bullying, they are letting a child down. I don't care what they say, bullying is happening in EVERY school in England. Just because it isn't violence, it doesn't mean that it isn't happening. Psychological bullying is often worse than physical bullying because the words are harsher than an injury. The words can be denied by a bully because there is no evidence that it even happened. Over the next few weeks, I am going to post some articles about bullying and how we can help our kids or friends.

Bullying doesn't just happen to kids, it happens in the workplace too. Although it is taken more seriously in the workplace as it is in school and it's easier for an adult to say there is a problem. But it is still bullying and if it is happening to you in the workplace, then you need to make someone aware of it. There is nothing to be ashamed of and nobody should put up with being bullied.